Well... I splurged for a large scale (101" wingspan) 100cc SU-26 Sukhoi ARF... relatively cheap for its size, which had me a bit concerned, but upon delivery... it's an awesome, well-built airplane! Originally designed for a 100cc gasser... I plan to convert to electric... my biggest yet!

Nitroplanes had them on sale all winter... could not resist for the price!
http://www.nitroplanes.com/su26100cc101.html

I plan to use a 100cc brushless motor from Hobby King.

A good friend of mine from France purchased this motor for a large scale Carden ARF he converted to electric (he originally had a DA100 in it and suffered a broke crank shaft) and said it packs quite a punch, and for the price you can not go wrong (something comparable like a large 100cc Hacker will cost around $1,200). Can't wait to get going on this project (maybe this weekend). I'm going to get a CF wing tube for it though since the aluminum one they provided appears fairly heavy for my liking (HK upgraded the tube from a 25mm to a 38mm tube, since some customers were experiencing failure of the original 28mm thin-walled tube). 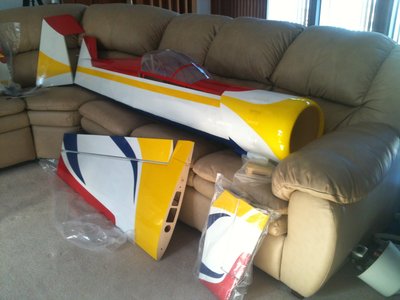 chistech wrote:Holy sh#t Tom, That thing is huge. If the battery lasts long enough maybe you can fly me over to Nantucket this summer!

Yeh... big,... certainly I won't get anything bigger... won't be able to transport unless I saw it in half!

Latest run-up/test this past weekend... way too much power I think... but should be fun!

Finally an update... I did in fact fly the Sukhoi twice already and both flights uneventful... well, except for the end of the first maiden. After landing, I was reving up the engine and suddenly the Castle Creations 160 amp speed controller died (so glad it happened on the ground!). I sent it back to Castle and 2 weeks later received a replacement (zero cost thank goodness). The issue was with me using long lengths (2 feet) of 8 gage wire connecting the ESC to the battery. These lengths even though thick gage, allow for large excessive ripple voltages (the voltage seen at the ESC when placing the battery under large loads and the long wires act as inductors, allowing the voltage to "sag" during every ESC pulse). This is a known fact when using large ESCs and Castle actually started selling a large capacitor bank which you place across the power leads near the ESC. This cap/filter bank reduces the ripple by 100-150% (I originally was seeing almost 4v of ripple where now I'm getting 1.8v max). Rather than spending $30 for the one made my Castle, I of course built my own for $5. Nevertheless, I'm still experimenting with motor timings and props and hope to have it all fine-tuned in a few weeks. It flies strong (motor maybe 50% stronger than I needed) and REAL BIG and amazingly light for 36 pounds UAW 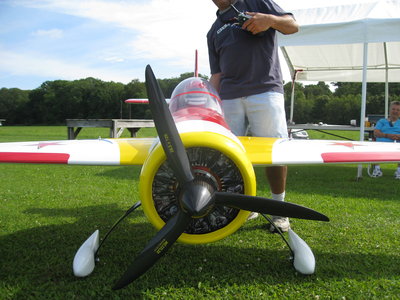